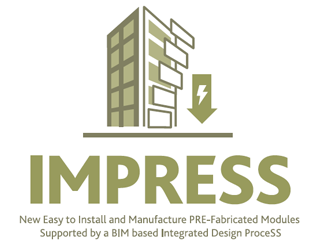 The Geonardo Team completed its next Geo3Dscanning mission. This time the journey led up to north to Coventry, West Midlands in the UK. The aim was to conduct a 3D survey of building façades, and through this, provide the basis for further activities on the façades in the frame of the Horizon 2020 IMPRESS project. Read Irene's blog post to learn more about the IMPRESS project, its ongoing activities and Geonardo's involvement.

As part of the project's ambitious aim, the second demonstrator site in Coventry (see picture above) will be subject to the entire IMPRESS process – from 3D laser scanning and modelling of the building façades to the production, optimization and installation of novel energy efficient panels.

What is 3D laser scanning?

Terrestrial 3D laser scanning is a way to capture and digitally represent physical objects in a given environment (see pictures below). The 3D laser scanner sends out an infrared laser beam into the centre of its rotating mirror. This laser beam is redirected vertically into the surrounding environment of the scanner and will be reflected back by surrounding objects into the scanning device. The scanner will then document the travel duration of the laser beam and translate this information into distance of the reflected point from the scanner. By sending out laser beams in a very high frequency after each other (up to 976,000 beams per second) and combining this with a constant rotation of scanner and mirror the terrestrial 3D laser scanner is able to cover a nearly perfect sphere around the device. The immediate result of the scan is a point cloud of the covered area. Multiple scanning positions for documenting a desired scanning object will result in multiple point clouds which can be joined together through post processing of the data.

How is the 3D laser scanner used?

The actual 3D scan took place on 27th May 2016. Scans were taken from the outside as well as the inside of the building (see pictures below) totalling in a number 23 different scanning positions.

The laser point cloud yielded from these scans (see picture below) will now enter the next step of processing at the Geonardo team. Although the building itself as the scanning object is rather small, the high number of scanning positions combined with the accuracy of the scanning device caused a very large dataset.

This means that after a day of practical work on the object, the task is not nearly finished. On the contrary, the subsequent work with the point cloud and the software processing will require further dedication of time and efforts. In any case, the team looks forward to producing a high accuracy 3D model from this successful data collection mission.

Daniel Frohnmaier
30 June 2016
No comment has been submitted yet