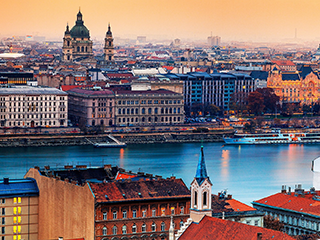 With Budapest as the site of our office and many successful training courses over the last few years (e.g. European Funding Academy, Proposal Development and Project Management Lab), we are always happy to welcome you to the capital of Hungary. In the hope of sharing with you an unbiased portrayal of the city, this blog post was not written by a Hungarian, but rather a non-local who has been living here for seven years.

Without doubt, anyone visiting Budapest as a tourist is charmed by the city’s Art Noveau, Baroque and Neoclassical architecture, the view from the banks of the Danube (parts of which are a UNESCO World Heritage site), affordable and diverse accommodation and cuisine, as well as a trendy and distinctive ruin pub culture. Nowadays, with the Hungarian movie industry booming, it’s also not uncommon to run into Hollywood celebrities exploring Budapest’s busy streets in relative anonymity.

Those who stay here a bit longer are bound to get an appreciation of how the network of metro lines, buses, trams, trolley buses, public bicycles and even public boats (that double as a budget sightseeing tour) provides a quick way to get around in this beautiful city. And with the famous thermal baths of Budapest and a thriving cultural scene, there is plenty to see – just be sure to book your ticket in advance as Budapestians are avid theatre and opera goers.

Having lived here for some time, I’ve had an excellent opportunity to observe how the city has evolved and progressed resulting in a blend of old and new. Development and renovation is present everywhere – from famous city squares, subway, bus and tram lines to local kindergartens, libraries and playgrounds.

…with the help of EU Funding

It is worth mentioning that many of these projects have been carried out with the support of EU funding1, as “through nine national and regional programmes, Hungary has been allocated EUR 25 billion from European Structural and Investment Funds over the period 2014-2020” with Hungary contributing EUR 4.63 billion2.

Várkert is a beautiful Garden Bazaar built in 1883 in the neo-Renaissance style near the Budapest Castle. It was designed as a marketplace and a park with numerous stores and studios. Later, the Bazaar was a famous dance club and park hosting various concerts.

However, in the 1980s it fell into disrepair and remained that way until 2014 when it was transformed into a picturesque recreation area in the heart of Buda as well as an exhibition and event venue.

Ferenciek Tere is an example of citizen-conscious urban planning when a busy downtown street was transformed into a pedestrian friendly zone.

In no small part due to these positive changes, Budapest has recently made it to the top of city rankings. For example, it was voted the most welcoming city in 2013 (according to reviews on housetrip.com) and the second best city in the world in 2013 and 2015 (according to readers’ choice of Conde Nast Traveler).

Your visit to Budapest will be an unforgettable one as the city has something peculiar to offer anyone. But if you’re looking to explore the region, Hungary’s capital is conveniently connected with other popular European cities (both due to the presence of low-cost flights and improved highways). Vienna, where most of our courses in the upcoming training season will be held, is just a two-hour ride away.

195% of all public investments in Hungary are co-financed by the EU, making Hungary one of the top beneficiaries of EU funding. http://ec.europa.eu/budget/mycountry/HU/index_en.cfm#cinfo

Liliya Levandovska
19 September 2016
No comment has been submitted yet