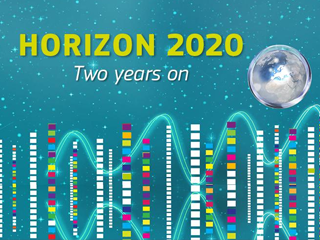 The European Commission has recently published its second Monitoring Report on the implementation of Horizon 2020, describing trends and statistics on participation in the years 2014 and 2015 altogether. While we have already analysed the findings on the first year, this second Report sheds light over more recent figures and trends.

Therefore, in 2015 the overall success rate in terms of number of eligible proposal was 10.7%: quite an impressive  decrease from the rate of 14% of 2014.

The table below shows in more detail four different ways to assess success in Horizon 2020.

Participants of our training courses were frequently asking about the breakdown of success rates per specific sub-pillars: finally the Commission has released this data in a convenient table, which we report below.

Based on this table, it may be interesting to highlight a few changes from 2014:

A general increase in the number of applications concurred to the overall decrease in success rates; more specifically, it was Higher Education Establishments (HES) and Private for Profit Companies (PRC) that registered the highest increase in number of eligible proposals submitted: respectively, +27.39% and +26.51% compared to 2014.

It can be safely stated that Higher Education Establishments have performed better than all other types of organisations, as they also scored the smallest decrease in success rate (-3.29%), compared for example to Private for Profit Companies, whose success rate decreased of 10.9%.

As the practical effects of Brexit remain to be assessed in the EU Research and Innovation landscape, it is striking to note that 15 out of the “top 50 HES organisations” of 2015 are based in the UK, followed by the Netherlands (9), Germany (5) and Sweden (5). UK also hosted the highest amount of “top 50 Public Entities” and of “top 50 Small and Medium Enterprises” (for more details and definitions on this point, see Annex V to the Commission’s Report).

Maintaining a geographical overview, all Member States have increased the number of submitted applications in 2015. The most active countries remain UK, Italy, Germany and Spain, although in 2015 Italy has surpassed Germany in terms of number of applications. Amongst Associated Countries, Switzerland remains the top applicant by far, followed by Norway and Israel as in 2014.

The best performing countries in terms of success rates however do not necessarily coincide with the most active ones: similar to last year, Austria scores first, Belgium second, and France fourth: Ireland remarkably improved its performance, moving from 12th place to 3rd.

As for newcomers, there are important differences in their participation according to the different Horizon 2020 pillars. The lowest share is in Excellence Science, where only 5.8% participants had not participated in FP7 (still, with an increase of 0.3 percentage points from 2014). The highest participation of newcomers has instead shifted from 2014 from the Industrial Leadership pillar (now 25.9%) to the Societal Challenges pillar (now 30.3%).

For both years, life seems to be harder for newcomers, whose applications are less likely to be retained for funding, compared to those submitted by organisations who had participated in FP7. This is especially true for Public Entities, whose gap is highest (9.8 percentage points).

With a total of 5 851 grant agreements signed in 2015, the time-to-grant (TTG) has improved from 2014, as 92.4% of the projects (excluding ERC actions) were signed within the established eight-month period, to which the Commission had committed.

Horizon 2020 remains a very attractive source of funding for R&I in Europe, providing a unique means for cross-disciplinary, cross-actor and cross-country collaboration. While further measures could be taken by the Commission to increase the likelihood of funding for high quality proposals (such as the “Seal of Excellence” pilot), the key question for R&I organisations is: are you up for the challenge?

Valentina Zuri
1 December 2016
No comment has been submitted yet