BLUE ECONOMY – What is it all about? 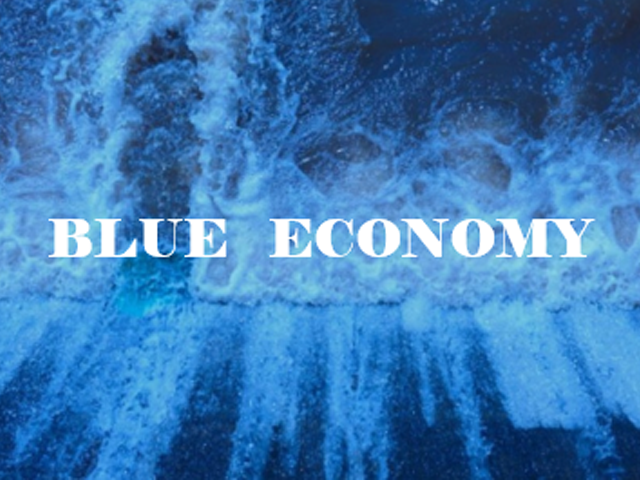 The term “Blue Economy” was first used by Gunter Pauli to describe his business model to shift society from scarcity to abundance "with what is locally available", but it has surged into common usage all over the world as a goal of policy-making and investment, and it is understood as the use of the sea and its resources for sustainable economic development.

If the Ocean were a country, it would be the world’s 7th largest economy

The Ocean has long been one of the drivers of world’s economy. However, it is not until recently that the eyes are on the great untapped potential for innovation and growth that the marine and maritime sector can bring to the economy. Bernhard Friess, head of the Maritime Policy and Blue Economy Directorate of the EU, assures that the seas can certainly be a great source of jobs and prosperity – but only if they are healthy, safe and sustainably managed. And that’s what it is all about!

Well, now that we understand that we are an integral part of the marine ecosystem, and that we must plan and implement our economic activities with care, balancing the desire to improve human living standards and wellbeing with the imperative to sustain ecosystem health, now it is the time to create new synergies between public authorities, local communities, researchers and private investors, and to harvest the full potential of the Blue Economy in a smart, sustainable and inclusive way.

The European Commission, through the Blue Growth strategy, has the priority to develop in particular five sectors that considers have high potential in Europe:

Aquaculture is the most rapidly expanding food industry in the world, with an average increasing rate of 8% per year. Currently, more than 50% of the seafood we consume comes from farmed species, and it is expected to keep increasing as a result of declining wild fisheries stocks worldwide.

The sector is mainly composed of SMEs or micro-enterprises in coastal and rural areas and the Commission intends to boost aquaculture through the Common Fisheries Policy reform. In 2013, it published Strategic Guidelines presenting common priorities and general objectives at EU level.

Europe is a maritime continent with a coastline stretching from the Arctic to the Mediterranean and from the Atlantic to the Black Sea. This makes coastal and maritime tourism the largest maritime activity in Europe employing over 3.2 million people, generating a total of € 183 billion in gross value added and representing over one third of the maritime economy.

As part of EU's Blue Growth strategy, the Commission has identified 14 actions which can help the sector grow sustainably and provide added impetus to Europe's coastal regions. For example, it is proposed to develop an online guide to the main funding opportunities available for the sector (particularly SMEs) and to promote strategies on waste prevention, management and marine litter to support sustainable coastal and maritime tourism.

Marine Biotechnology, or Blue Biotechnology, is concerned with the exploration and exploitation of the sea biodiversity that could enable us to develop new products of great value. Through new gene sequencing technologies, marine organisms other than fish and shellfish have the potential to provide inputs to the blue economy. A successful example are anti-viral drugs coming from Caribbean sponges.

The EC created a strategic approach to research and innovation to provide the scientific and technological bases for substantiating the strategic decisions that emerging industrial sectors need.

According to the Commission, in the very short term, the sector is expected to emerge as a niche market focused on high-value products for the health, cosmetic and industrial biomaterials sectors. By 2020, it could grow as a medium-sized market, an in a third stage, around 15 years from now, it could be subject to technological breakthroughs, and become a provider of mass-market products, together with a range of high added value specialised products.

Blue energy, marine energy or ocean energy technologies are currently being developed to exploit the potential of tides and waves as well as differences in temperature and salinity besides the more studied offshore wind farms.

According to the Commission, these 5 offshore renewable energies have the potential to enhance the efficiency of harvesting the European energy resource. However, commercial operation of blue energy technologies still needs investments in grid connections and transmission capacity. Furthermore, efforts to reinforce research and development in the field of ocean energy are needed in order to reduce costs, lengthen the operating life of equipment and streamline logistics in the technologies.

The European Commission has developed a two-step action plan to support this emerging sector. In the first phase (2014 – 2016), a secretariat and ocean energy forum have been set up. For the period 2017-2020, the action will be focused on developing the Ocean Energy Strategic Roadmap.

A lot of polemic goes around this sector. Today commercial scale seabed mining operations are limited to shallow water, but given the discovery of most promising deposits of the so-called “nodules” – small mineral-rich rocks – from the seabed, the game is changing. Even though the idea of exploiting the gold, copper, manganese, cobalt and other metals of the ocean floor has been considered for decades, it only recently became feasible with high commodity prices and new technology.

Nodules in the Pacific Ocean have more Mn, Ni, Mo and Co than the entire global terrestrial reserve base for those metals.

The polemic is two-fold:

The European Commission is engaged in a variety of studies and projects aimed at shedding light on the benefits, drawbacks and knowledge gaps associated with this type of mining. A global annual turnover of marine mineral mining can be expected to grow from virtually nothing to €5 billion in the next 10 years and up to €10 billion by 2030.

The infographic created by 911Metallurgist and NeoMamStudios analyses in a very illustrative way if deep seabed mining worth the risk. You can find the full version here.

Now that you know what is Sustainable Blue Economy about, you can follow what will be discussed at Our Ocean Conference as it will be one of the 6 areas of action to be addressed. The EC will be looking for high-level commitments from the industry, national and local administrations, research institutions and civil society to delivering and transforming the challenges ahead into an opportunity for cooperation, innovation and entrepreneurship.

The other 5 areas to be discussed next month among world leaders include Marine Protected Areas, Climate Change, Sustainable Fisheries, Marine Pollution and Maritime Security.

Stay tuned for our upcoming blogpost on Our Ocean Conference as we will be participating in the side events!

Follow through the hashtag #OurOcean all the activities and attendants including heads of state and government; foreign, economy, environment and fisheries ministers; and other established and up-and-coming ocean leaders in government, business, finance, science and civil society, as well as young and cutting-edge innovators and entrepreneurs and global leaders in ocean conservation!