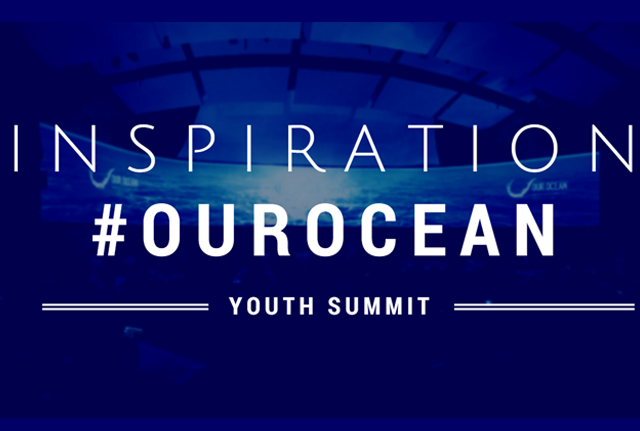 The 400 global commitments on actions for healthier oceans made at #OurOcean Conference in Malta on 5-6 of October, surpassed the 7 billion euros and it is definitely a success!  However, for youngsters that inherited the weight of a decadent Ocean on their shoulders, with a challenging gloomy future to solve ahead, the Our Ocean Youth Summit provided an enormous and unexpected amount of inspiration! That, is what I definitely take from this 2-day event.

Sustainable Oceans Alliance and the European Union, brought together 100 young ocean leaders from 50 nations to work on 1 mission: to find sustainable solutions for the Ocean. Unexpectedly, it also brought the highest existing caliber of speakers from the ocean community to get inspired from.

100 youngsters motivated to take the future in their hands and surf together the rough tide of marine pollution, ocean acidification, climate change, overfishing, depletion of ecosystems, endangered species and general human negligence towards the Ocean.

*Click on the image to be redirected to the video*

As one of the 100 participants, here are my three key takes-on:

Although Lonely Whale Foundation uses this catchy play of words in their campaign to stop using single-use plastic straws and #StopSucking, I also take this phrase as “we all share the blame on this”. It is true, we all have contributed to this mess, and we all need to solve it together.

Linked to #1, few months ago I read a statement from polar explorer Robert Swan that despite the obvious, it made me understand the level of inaction compared to the one needed and the urgency to do something about it. He said that “the Greatest Threat to Our Planet Is the Belief That Someone Else Will Save It”. And when hearing Celine Cousteau, we all embraced that the path it’s tough and could be even tougher.

So, we need to advocate and catalyze change!

That is the strategy that Charles Goddard, Editorial Director from The Economist told us is following through their yearly World Ocean Summit where they bring private and public sectors together to turn blue pledges into reality.

If advocating is not enough, then we should make it a culture.

Nathan Walworth from CoValence Life said we need to “Make sustainability a culture. Make a culture around ocean protection, climate change, circular economy. But make it without using those words”. His 4-step path:

WE ARE IN A BETTER POSITION THAN OTHER GENERATIONS, AND THERE IS HOPE

The highest of inspirations comes always from the living legend, explorer, pioneer and highly adored by the ocean community, Her Deepness Sylvia Earle. A woman that dove the once existing pristine and diverse seas and that has witnessed the disappearance of biodiversity hot spots, is the one who is more positive about change being possible and the one pushing for hope spots through her foundation Mission Blue.

Sylvia argues that we are in a better position now, because now we know. We know the problems we are causing, we know now that our actions, even far away from the Ocean affect directly the Big Blue. We know we have to do something about it and we know we need to do it fast. We know there are solutions and we know that we need to act as if our life would depend from it, because it does!

I will highlight my top 3 advices on this:

We might be very good at something, but there are many others who are as good at many other things. Collaboration and multidisciplinarity are needed. And I would personally add humbleness, as shown by Sylvia.

2. Figure out what your currency is. Emily Penn, ocean advocate who has lived for the past 10 years at sea said to us:

“Figure out what your currency is. Figure out what you have to offer, what you are brilliant at. It could be graphic design, it could be raising awareness, it can be anything. Once you figure that out, use that. Don’t approach people by asking if they could help you, rather say what you could do for them and how. It will take you to wonderful places!”.

3. Never stop questioning, challenging or being passionate. Never stop being a kid and be humble. This is actually a mixed advice coming from two different people.

- John Brincat, Commissioner at DG MARE pulled me from my arm on my way out of one session to tell me that I gave a great remark. He then asked me to never stop being myself, never stop questioning what is given and challenging it. He said that when money and commitments come, people tend to change priorities. I believe this is something we must keep in mind and alive.

- Never stop being a kid. This one comes from Sylvia Earle. She says that scientists are little kids who never grew up and never lost the sense of wonder. Scientists have curiosity, who, what, where, why, when, and how. Just like a five-year-old kid!

- Humbleness. That was not said but shown. Sylvia Earle, being of the world’s best known marine scientists and a National Geographic Explorer-in-Residence, is of the humblest people I have had the pleasure to meet. The world has so much to learn from her!