Inspiring stories in times of uncertainty 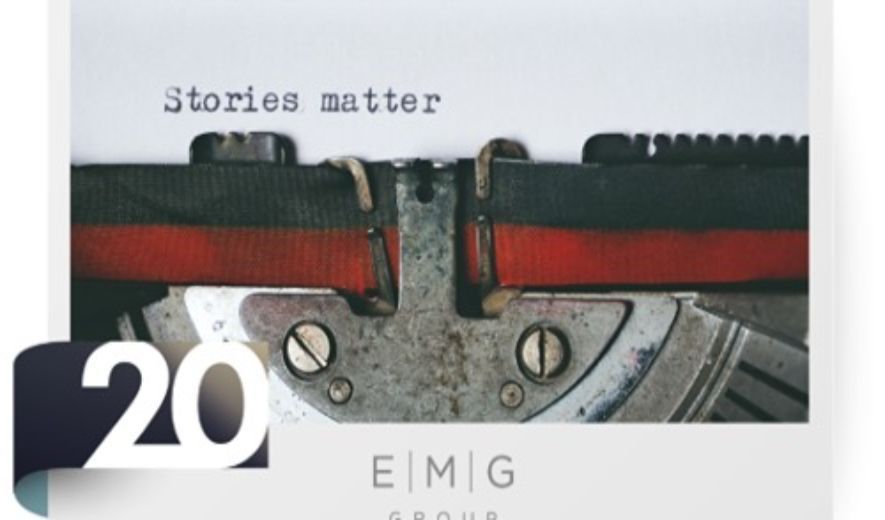 Amélie soundtrack has been gently playing in my ears for the last few minutes. A soft but warm light is shed on my laptop, bathing with orange everything around me. It is now, 24th March, that I've eventually digested the fact that we had scheduled a celebratory 20th Anniversary blog post for 27th March, the last Friday of the month, the day in which this post will go live.

This campaign was intended to bring you closer to us. How? By sharing with you the fondest memories and moments which we are most proud of. This is why I decided not to celebrate something that happened in the past. But instead, I, with the power vested in me by some quality quarantine time and by a packet of chocolate chip cookies which found a permanent free parking lot on my desk, I thought it's high time we cherished our colleagues. Those kind souls we have had the pleasure to share the office space with until - sigh - precisely two weeks ago.

So, whether you are on a voluntary self-isolation, or don't have a choice like our Italian and Spanish friends, let's all focus on a bunch of pleasant thoughts. Let them permeate you and unleash a good dose of dopamine, which can be compared to the sensation you get when flicking through a long-forgotten family photo album. Ideally, if you were born in the 80s like me, you should see yourself wearing unmatching clothes (i.e. crazy patterns, flashy colours) and something extremely practical for mums of all times: yes, I'm talking about the infamous bowl-cut.

It might sound obvious, but when a few years ago, I started my first office job, I was simply amazed by the fact that I spent more time with my colleagues than with my family and friends. I could even dare to say that it was like being back at uni. Sharing a flat with people I didn't know, getting annoyed if tomato sauce was left in the pan for days.. Ok, the equivalent of that now would be... not cleaning up the nozzle of the coffee machine?

Either way, I love listening to the stories people around me want to share; it helps me understand their values and strengths, regardless if they clean up the coffee machine or not. And more than anything, listening to others helps us put things in perspective and reconsider our problems.

Here, I wanted to highlight a few stories of strength that I found close to my desk. In fact, by moving a few feet away from my workstation, you can see Juan, a talented graphic designer who came all the way from Venezuela. He was brave enough to escape from the authoritarian regime of Maduro three years ago, and just because he felt he needed an extra challenge, he recently took up Hungarian classes.

If you turn on your left, you’ll meet Evdokia, a Balkan lover from Thessaloniki, one of the liveliest people in the office, who vividly remembers the period of Capital Controls in Brussels when she was not able to withdraw money from the bank from one day to the next. She was studying abroad at the time, and I can only imagine how scary that may have felt. Funnily enough, her grandmother went to see her only two weeks before the crisis, and her luggage was filled with packs of pasta, lentils and rice. Evdokia could not believe the food she carried all the way from Greece and explained to her grandmother that supermarkets in Brussels had everything she needed. To which her grandmother responded: "You never know when you'll need more supplies."

Walk a few more meters and you’ll meet Jelena, a project manager from Belgrade. If you ask her, she has crystal clear memories of the embargo in the early '90s. She recalls empty shelves in stores and waiting for hours in line for basic food such as milk and bread, and this was a norm for years. In 1999 NATO bombed her city... all she could do was cover her ears, and run to an underground shelter. A similar story applies another project manager called Jelena, who was in Montenegro when the bombings started and run underground as soon as the sirens went off, hoping nothing would happen.

All of this just goes beyond my imagination. It just seems unnatural.

The stories are many, and the people behind them are incredible. Let’s value those who - now virtually - surround us, and help us put current COVID-19 times into perspective.

Francesca Monaco
26 March 2020
No comment has been submitted yet